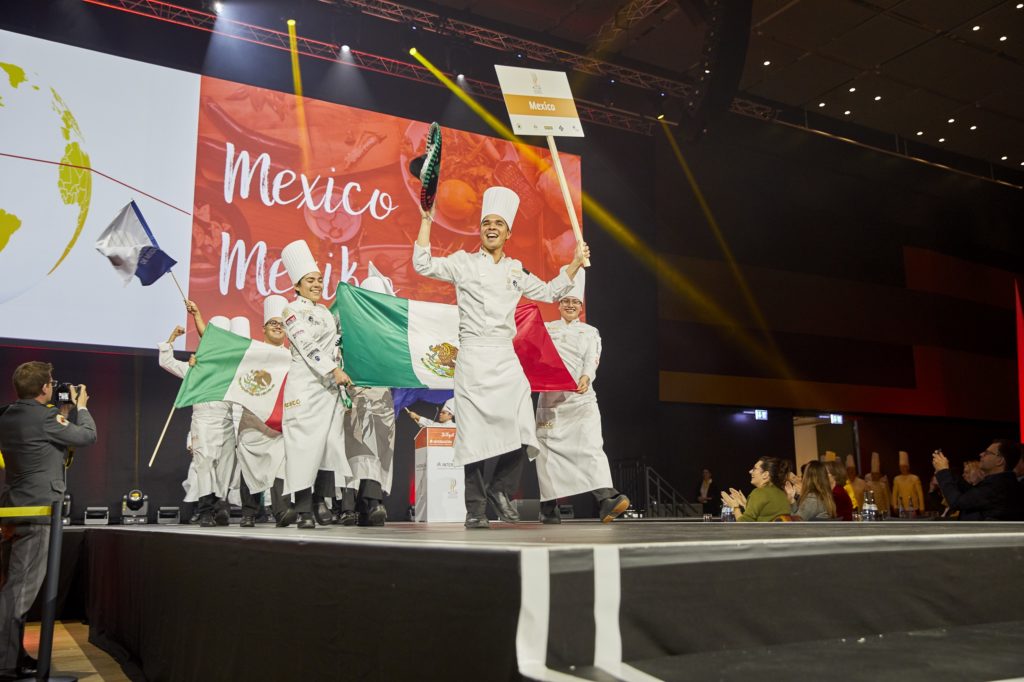 The Mexican team was celebrated by the audience. Photo: IKA/Culinary Olympics

Approximately 1500 international guests and fans of the culinary teams have attended the opening of the IKA/Culinary Olympics and the Intragastra, the leading trade fair for the hotel and catering industry in Stuttgart.

The lighting of the Olympic flame clearly showed that the Olympic spirit – wearing a chef’s hat – has symbolically reached Stuttgart. Who, if not an Olympic medal winner, could be better suited to perform this ritual? As a result, it was surprise guest Fabian Hambüchen, who took over the festive opening of the IKA/Culinary Olympics and the Intragastra, waving the Olympic torch. Accompanied by the cheers of their fans, several hundreds of chefs, pastry chefs and individual exhibitors from 70 nations marched into the Internationale Congresscenter Stuttgart (ICS) while waving their flags and getting into the mood of competing in the world’s largest culinary competition. The Eric Gauthier Dance Company set the cultural scene with their performance for the 1500 invited guests from politics, industry and society, the representatives of the World Association of Chefs´ Societies (WACS), the participating national culinary teams and their international jurors. Even Julia Klöckner, Federal Minister for Food and Agriculture, extended her greetings via video message from Bonn.

The lighting of the Olympic flame also marked the opening of this year’s Intragastra, the leading trade fair for the hotel and catering industry. According to Stefan Lohnert, Managing Director of the Messe Stuttgart, the Stuttgart fairground, “the Intragastra, with its wide range of exhibitors from the hotel and gastronomic industry, represents the entire world of hospitality”. It is one of the top three HORECA fairs in Europe. It is even considered to be the leading trade show for the hotel and catering industry in the German speaking countries, due to its themed halls featuring all of the market leaders and specialist suppliers. “With 1400 exhibitor spread out over a surface of 115000 sqm, the trade show is a source of inspiration and offers solutions which will help gastronomic outlets to get fit for the future. “With the Baden-Württemberg branch of the German hotel and catering industry association DEHOGA and the Baden-Württemberg Confectioners’ Guild, we have two fabulous partners, who have accompanied the Intragastra successfully for many years. Through their know-how they have supported our endeavours to further develop this trade show immensely”, explains Stefan Lohnert. 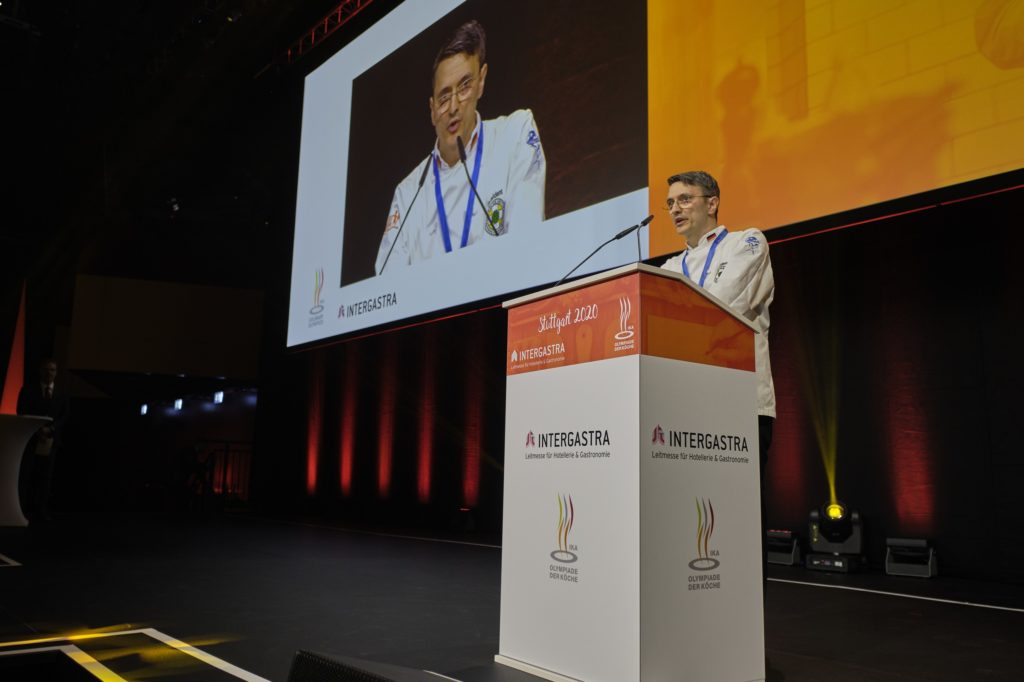 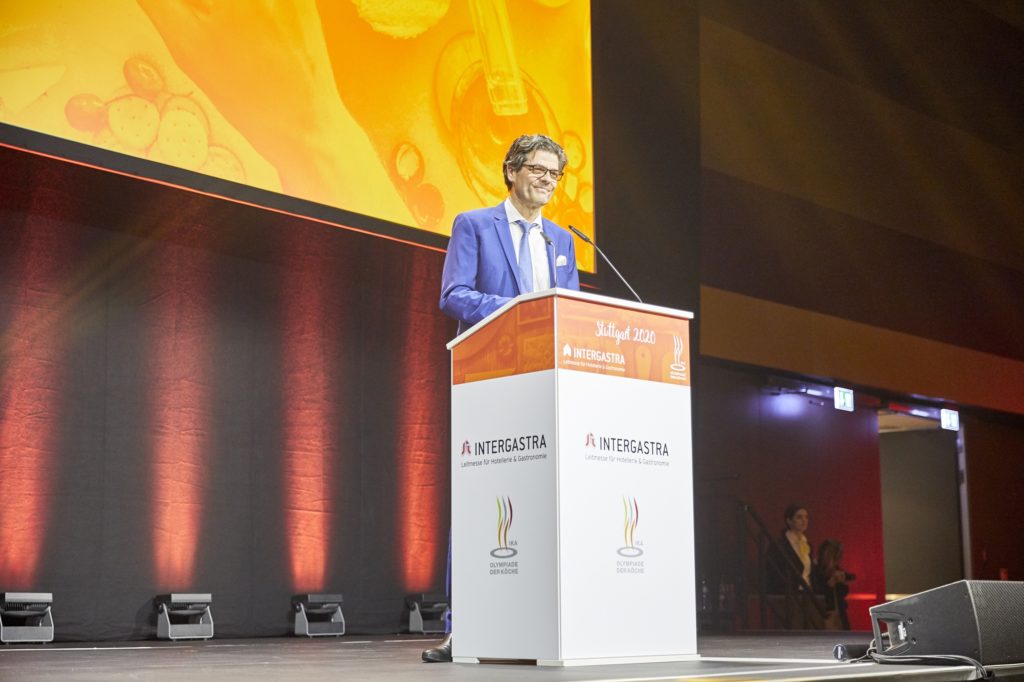 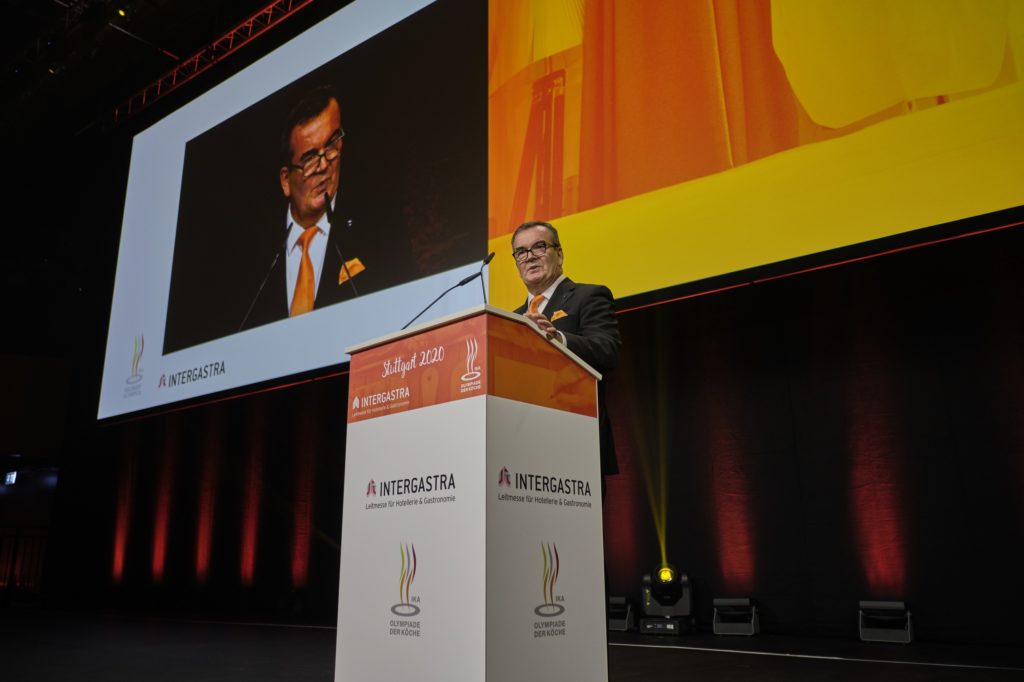 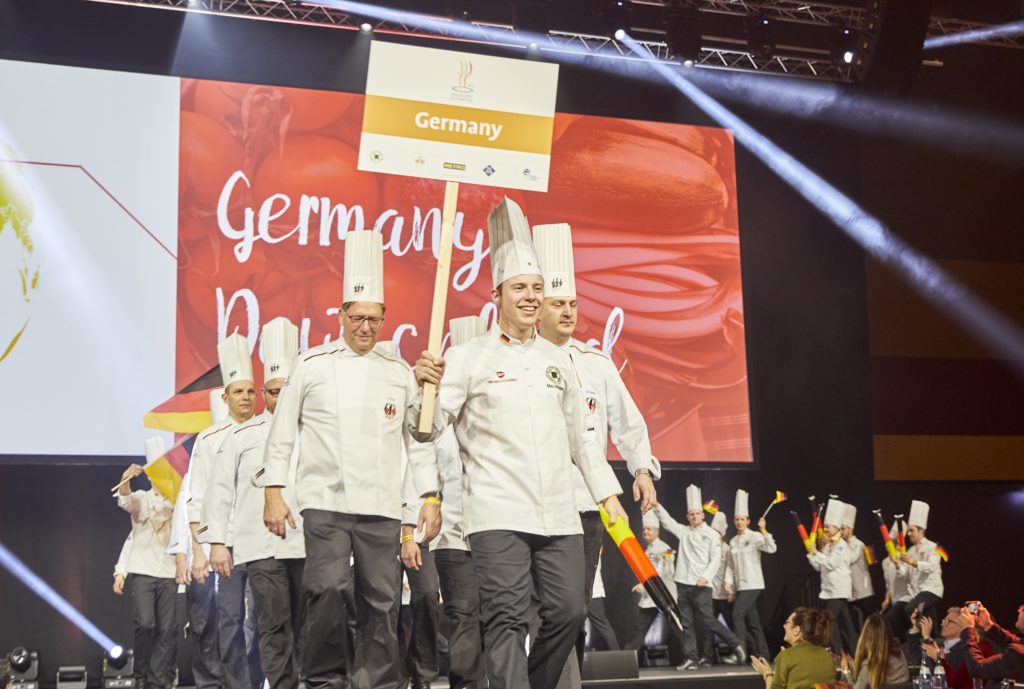 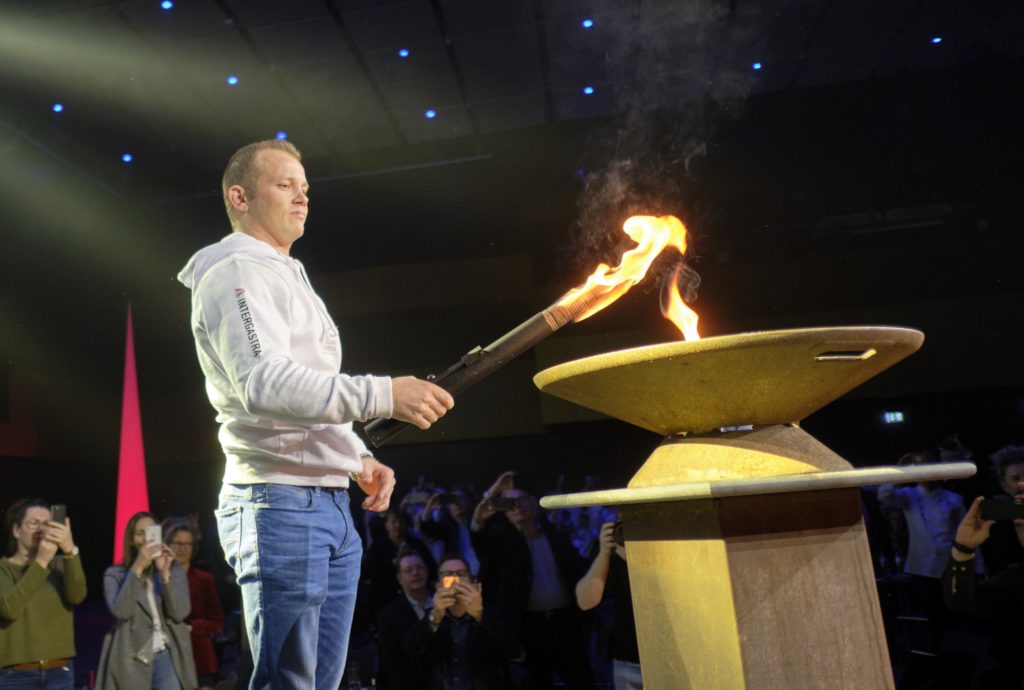 Wht started out as an idea more than a year ago, with the German Chefs’ Association, Verband der Köche Deutschlands e. V. (VKD) and the Dehoga Baden-Württemberg, has become a reality today. I’m delighted that the city of Stuttgart hosts the world of international culinary arts!” According to him, the IKA/Culinary Olympics in Stuttgart will feature both exciting culinary competitions during its premiere and culinary highlights – from lunch all the way to a 7-course Chef’s Table menu. The renowned competition has thrilled many industry visitors due to the high level of dedication and motivation of the international Teams.

Stefan Lohner further explains: “Approx. 200 chefs, pastry chefs and individual exhibitors will be challenging each another in different competitions. Next Wednesday, the Olympic medals in culinary art will be awarded to the winners and winning teams. It is a great honour to host the 25th edition of the Culinary Olympics team at the Messe Stuttgart.”

Fritz Engelhardt, the President of the Baden-Württemberg Dehoga fully endorses this statement: “The hospitality business with a total of 220000 companies and over two million employees in Germany alone, will closely follow the events in Stuttgart; because here at the Intragastra, we will be able to take a look at the innovations, products and ideas, which will move our companies forward. This professional fair, which has grown even lager, is rounded up by a spectacular premiere: we are looking forward to the IKA/Culinary Olympics. The fact that the world’s largest culinary competition will take place in Stuttgart for the very first time, and at the same time as the Intragastra, is a milestone for the development of our industry trade show an for the entire region.”

Richard Beck, President of the German Chef’s Assoction, Verband der Köche Deutschlands e. V. (VKD), the organiser of the IKA/Culinary Olympics, is looking forward to the upcoming competition days: “Preparing for the Culinary Olympics means so much more than just cooking. The training is a hard and extraordinary path to success. And there will be many magic moments for the teams who often feel more like family“. This is how Richard Beck describes the preparations of the participating teams. “The day of the opening ceremony is the day that we have all waited for with impatience and excitement. On this very day, the participants’ – and organisers’ – dreams finally materialise.

Thomas Stroble, the vice State Premier and Minister of the Interior of the Federal State of Baden-Württemberg shares this enthusiasm: “It is fantastic that such a high-calibre international culinary event takes place in Baden-Württemberg, at the Stuttgart fairground. The Culinary Olympics is the world’s oldest, largest and multifaceted culinary competition. I’m, therefore, particularly delighted to announce that the next two Culinary Olympics – 2024 and 2028 – will also take place in Baden-Württemberg. According to Thomas Stroble, Baden-Württemberg is just the right place for the Culinary Olympics. We are a gourmet’s paradise. The Baden and Württemberg population can even present solemn proofs! One look into the Guide Michelin or other gastronomic guidebooks shows that one quarter of Germany’s leading restaurants are located in the South West of the Federal Republic.” Michelin-starred restaurants, taverns, fine wines from Baden and Württemberg and tasty dishes from the Swabian and Baden cuisine make the region a heartland of culinary specialties.

Thomas Strobl thinks that this is a fact: “We people from Baden-Württemberg know that eating is more than just filling your stomach. The passion for good food brings people from different nations closer together, despite language barriers. It is an important part of the social and cultural identity of people. During the Culinary Olympics this becomes visible and palpable. Culinary art brings people closer together – and this is true for both gourmets and chefs”, claims Thomas Strobl.

The opening was concluded by the VKD’s President Richard Beck, who declared – accompanied by resounding applause: “I declare the 2020 Culinary Olympics in Stuttgart open!” Starting Saturday, the teams will cook every day until Tuesday to win an Olympic gold medal. The Junior National and National Culinary Teams, the Community Catering, Military and Regional Teams as well as individual culinary artists will challenge each other at the highest culinary level – to the great joy of numerous gourmets, who have every reason to look forward to the sophisticated gourmet menus with ingredients and creative ideas from all parts of the world.

It's worth browsing through – for die-hard fans and...

Save the Date: The countdown to the next IKA/Culinary...