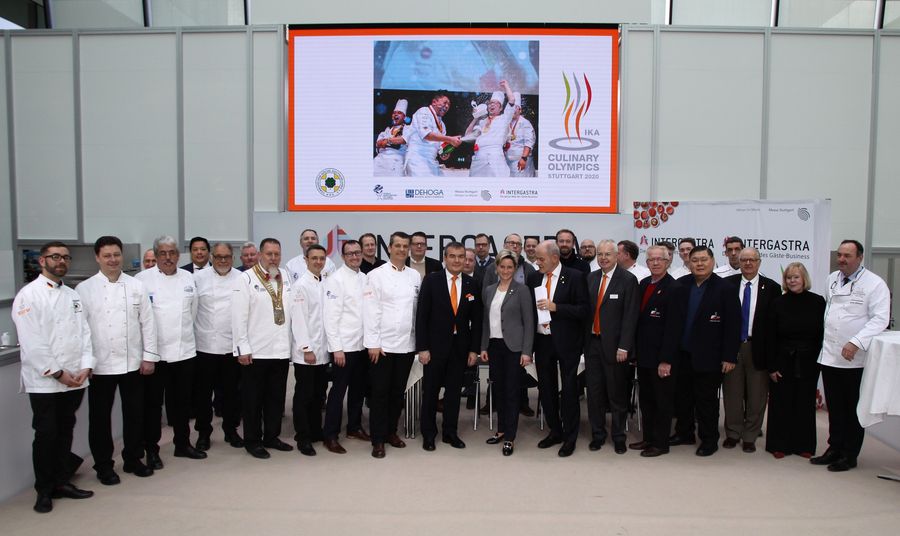 As the organizer of the IKA/Culinary Olympics, the German Chefs’ Association, Verband der Köche Deutschlands e. V. (VKD), presented the regulations for the world’s largest culinary exhibition today, Tuesday 6th February. A new element will be the Chef’s Table, which will allow the visitors to sit right in the kitchen of the national teams and enjoy their meal. With the leaving out of the show platters, an era will come to an end. International team representatives welcomed the new regulations.

For the visitors of the 2020 IKA/Culinary Olympics in Stuttgart, sitting at the Chef’s Table is likely to become the highlight of the event: the guests will sit at tables of ten directly at the cooking booths, in which the national culinary teams from all over the world will prepare their culinary delights – and a chat with the chefs will of course be included. Never before have the visitors of this culinary contest been able to get so close to the teams.  At the 2020 IKA/Culinary Olympics, the German Association will set new standards regarding international cooking competitions: for the very first time no cold show platters will be exhibited by the national teams.

This announcement was made by the VKD as the organizer of the event on Tuesday, 6th February, during Intergastra in Stuttgart. “With this decision, an era has come to an end,” explains Hans-Peter Tuschla, Vice President of the VKD, and as such, responsible for the scope of culinary competitions. Since the very first edition of the IKA/Culinary Olympics in 1900, the exhibition of cold platters has always been one of the major attractions of the event. Starting in 2020, the exhibition of cold platters will now be replaced by a Chef’s Table.

“Our decision was made mainly for two reasons”, explains Mr Tuschla: “The waste of food is an important issue. This is something we want to actively reduce”, he underlines. The other reason was to increase transparency during the preparatory phase of the competition. “The entire cooking process for the Chef’s Table takes place in the cooking boxes under supervision of the jury and the inquisitive glances of the guests – which is quite unlike the cold platters which the teams used to bring to the competition already plated”, explains Mr Tuschla.

This decision was also welcomed by the Culinary Committee of the World Association of Chefs’ Societies (WACS), which is in charge of the regulations and the training of the jury for all of the competitions. According to Gert Klötzke, chairman of the Culinary Committee, the worry that an element of “true culinary art” will be lost, is unfounded. At the 2016 IKA/Culinary Olympics in Erfurt, the junior national teams exhibited an “Edible Buffet” instead of a cold platter. “This shows”, he claims, “that the teams have proven that great culinary art may also be presented in form of hot dishes”.

Approximately 50 representatives of national culinary teams from 18 nations travelled to Stuttgart to familiarise themselves with the new regulations and to check out the on-site conditions. “The fact that the team representatives travel so far to find out about the latest requirements, shows their great interest in the IKA/Culinary Olympics”, explains VKD President Andreas Becker. The modernisations of the competition were met with a consistently positive response.

Visitors of the IKA/Culinary Olympics, which will take place from 14th to 19th February 2020, in conjunction with the Intergastra, will have various options to taste the creations of the national culinary teams: at the Restaurant of Nations, the menus of both the junior and senior culinary teams will be available. The national culinary teams will prepare the Chef’s Table, while the juniors will compete for the medals in the category “Edible Buffet”. In addition, the community catering teams will prepare high-quality meals.

Both the categories “Show Piece”, in which individual exhibitors will show their skills, and the category “Live Vegetable Carving” will remain unchanged. And just like in past editions of the contest, there will also be regional culinary teams participating.

The German Chefs’ Association will provide further information with regard to advance ticket sale dates for the 2020 IKA/Culinary Olympics. The regulations for individual exhibitors will be available for download soon at www.culinary-olympics.com .