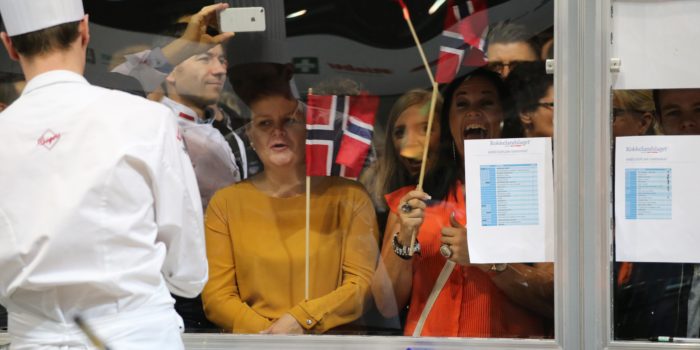 Only held once every four years and for the first time in Stuttgart: The IKA/Culinary Olympics ensures an international and Olympic trade fair experience. From October on, visitors can book menu tickets.

Frankfurt, 2 October 2019 –The IKA/Culinary Olympics (14 to 19 February 2020) will coincide with INTERGASTRA, the leading trade fair for the hotel and gastronomy business (15 to 19 February 2020), for the first time at Messe Stuttgart. The IKA/Culinary Olympics is the world’s oldest and largest exhibition of culinary art and is organised by the Association of German Chefs. In the Olympic year 2020, international teams of chefs will compete over four days for medals in Stuttgart under the motto #takingpartiseverything. On four trade fair days INTERGASTRA visitors will have the opportunity to watch more than 2,000 chefs from over 70 countries live as they cook, to cheer them on as they prepare around 8,000 international menus, and then to enjoy the top-quality dishes from around the world. Anyone who wants to not only visit the Olympic event, but also experience the culinary delights, can secure a menu ticket in October (www.culinary-olympics.com/menue), e.g. for a tasty lunch or a multiple-course dinner.

The offering at the IKA/Culinary Olympics is varied and offers many choices with the purchase of a ticket. Upon purchase the visitors can decide on their national team, a menu of five competitions, as well as the competition day. International teams of chefs compete in the four categories – National Teams, Youth National Teams, Community Catering Teams, as well as Military Teams.

They compete in a total of five competitions: The three-course menu of the Youth National Teams in the competition Restaurant of Nations is recommended for the midday business meeting. In the competition Restaurant of Community Catering the Community Catering Teams and the Military Teams show what communal food looks like around the world. Their menus are perfect for a short break – thanks to the self-service facility, these menu variants also offer flexibility when planning lunch.

The National Teams also prove themselves in the competition Restaurant of Nations with the best three-course evening menu. In this competition it is recommended to purchase menu tickets for different teams; this way you can experience the international variety. Towards the end of the day the National Teams also compete in the Chef’s Table* with the preparation of a seven-course menu. Visitors with a ticket for the Chef’s Table sit directly at the cooking pits and are treated to an aperitif. While at the IKA Buffet the Youth National Teams conjure up national delicacies for a four-course buffet and round off the evening programme at the IKA/Culinary Olympics.

The international regional teams impress in the Culinary and Pastry Art exhibitions with the great art of finger food, the fancy desserts and the festive dishes – as do the numerous individual exhibitors in the Entrance East who conjure up delicate and beautiful creations from vegetables, fruit, cheese, sugar or chocolate.

The road to the medals
As soon as the Olympic flame has been lit, the participants in the IKA/Culinary Olympics have only one objective: to gain as many points as possible. On the four competition days from 15 – 18 February 2020, gold, silver and bronze medals will be awarded in every competition based on the number of points. At the final award ceremony the total number of points will decide who will be the Olympic champion.

Teams and menus at a glance

The Youth National Teams compete in the competitions Restaurant of Nations and IKA Buffet for the highest number of points. The Three-Course Lunch (Restaurant of Nations) costs 49 euros per person and the selection at the evening Four-Course Buffet (IKA Buffet) including an aperitif is 449 euros and is designed for five people per ticket.

The Regional Teams impress with creations in the competitions Culinary and Pastry Art and the individual exhibitors combine craftsmanship with creativity and flair.

Overview of the teams, menus, meals, schedule for the competitions and getting there: here or via  www.culinary-olympics.com/menue

Allergens and special diets (e.g. vegetarian, kosher, halal) are listed on-site and can be examined.

* Chef’s Table: Guests without a ticket for the Chef’s Table will not be able to watch the national teams in the live cookery demonstration from 6 pm due to the preparation for this competition.