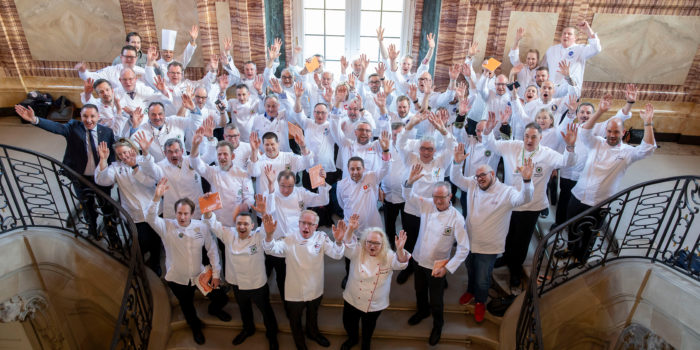 The games can begin: The Olympic athletes Fabian Hambüchen and Tabea Alt drew the competition days.

Stuttgart, 15 February 2019 – With the group draw on 14 February, the German Chefs’ Association (VKD) and Messe Stuttgart opened the competition season for the 25th IKA/Culinary Olympics (14 to 19 February 2020). In the New Castle in Stuttgart, the gymnasts and Olympic athletes Fabian Hambüchen and Tabea Alt drew the competition days of the national culinary teams. The oldest and largest international culinary arts exhibition takes place during the INTERGASTRA, the leading trade fair for the hotel and catering industry (15 to 19 February 2020). For four days, international culinary teams will fight for victory at the exhibition. Visitors have the opportunity to watch live cooking and enjoy menus from all over the world.

The IKA/Culinary Olympics, the oldest and largest international culinary arts exhibition, will be the starting point for the Olympic year 2020 at INTERGASTRA on 14  February 2020. True to the Olympic trade fair’s motto #takingpartiseverything, around 2,000 chefs and pastry chefs from more than 60 nations compete against each other and set culinary trends with their creations. In order for the teams to prepare sufficiently for the challenge in February of next year, the competition days of the 32 National and 24 Junior National Teams have now been determined. “We are pleased that team representatives from Japan, Canada, Sweden, the Czech Republic, Denmark, Austria, Switzerland and the USA were on site. They wanted to find out right away on which days they will be competing”, explains Daniel Schade, Vice-President of the VKD. The Managing Director of Messe Stuttgart, Ulrich Kromer von Baerle, looks forward to the IKA/Culinary Olympics in Stuttgart: “With its structured hall layout and the extraordinary range of exhibitors from the hotel and catering industry, INTERGASTRA represents the whole world of hospitality. IKA benefits from this foundation and we benefit from its internationality.”

VKD and Messe Stuttgart received prominent support by the Olympic athletes Tabea Alt and Fabian Hambüchen. “It was an honor for us to be here. We know the excitement prior to competitions and already share the thrill with the teams”, says Olympic champion Fabian Hambüchen. The athletes drew the days for the Restaurant of Nations (National Teams, evenings, Junior National Teams, lunchtime) and the Restaurant of Community Catering (lunchtime). All further competition days for the teams resulted automatically.